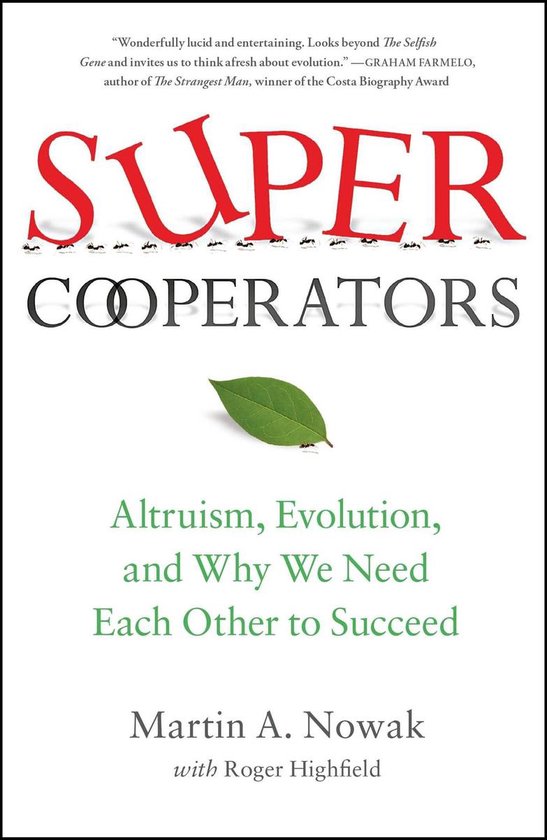 Altruism, Evolution, and Why We Need Each Other to Succeed
€15.65 bij bol.com
Inhoud
Betrokkenen
Lees mogelijkheden

EVOLUTION IS OFTEN PRESENTED AS A STRICTLY COMPETITIVE ENDEAVOR. This point of view has had serious implications for the way we see the mechanics of both science and culture. But scientists have long wondered how societies could have evolved without some measure of cooperation. And if there was cooperation involved, how could it have arisen from nature “red in tooth and claw”?

Martin Nowak, one of the world’s experts on evolution and game theory, working here with bestselling science writer Roger Highfield, turns an important aspect of evolutionary theory on its head to explain why cooperation, not competition, has always been the key to the evolution of complexity. He offers a new explanation for the origin of life and a new theory for the origins of language, biology’s second greatest information revolution after the emergence of genes. SuperCooperators also brings to light his game-changing work on disease. Cancer is fundamentally a failure of the body’s cells to cooperate, Nowak has discovered, but organs are cleverly designed to foster cooperation, and he explains how this new understanding can be used in novel cancer treatments.

Nowak and Highfield examine the phenomena of reciprocity, reputation, and reward, explaining how selfless behavior arises naturally from competition; how forgiveness, generosity, and kindness have a mathematical rationale; how companies can be better designed to promote cooperation; and how there is remarkable overlap between the recipe for cooperation that arises from quantitative analysis and the codes of conduct seen in major religions, such as the Golden Rule.

In his first book written for a wide audience, this hugely influential scientist explains his cutting-edge research into the mysteries of cooperation, from the rise of multicellular life to Good Samaritans. With wit and clarity, Nowak and Highfield make the case that cooperation, not competition, is the defining human trait. SuperCooperators will expand our understanding of evolution and provoke debate for years to come.