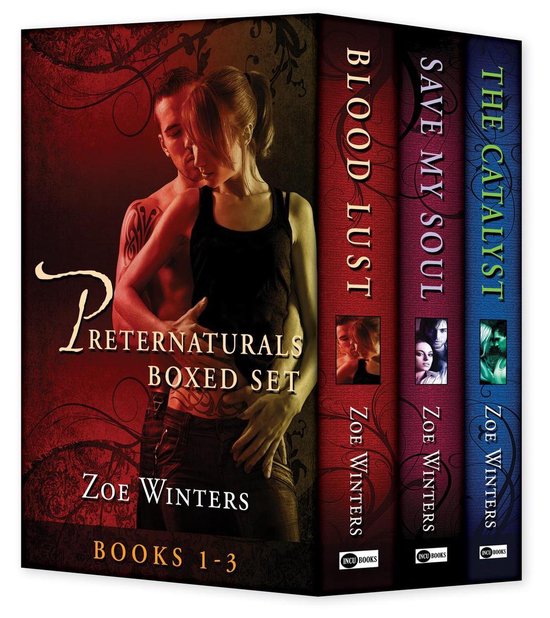 
The Preternaturals: Everybody is the hero of their own story... and the villain of somebody else's.


A book in 3 parts that introduces the world of the Preternaturals (all couples appear throughout the series):


When werecat, Greta learns her tribe plans to sacrifice her on the next full moon, unleashing the potent magic of her blood, a dark sorcerer is the only one strong enough to protect her. Will Dayne kill her as he has so many others of her kind? Or is his grudge against her family strong enough to save her?


In the midst of a power struggle for vampire king, it soon becomes clear to Anthony that the only way to protect a fragile human in his care is to claim her as his mate. Meanwhile, his deepest wish is to have his lover awakened from the memory loss that took everything... not just the memories he meant to erase.


Be small. Be invisible. It's an understandable life mantra for a human woman in a world of monsters. But even worse, Jane's blood contains a touch of vampire magic that makes her their target. With her faster-than-normal healing time, she's an ideal punching bag for the abusive vampire she's been living with, the one she thought might protect her this time. When he sells her to a werewolf in payment for a gambling debt, Jane is sure her life is over. But Cole may be the one being who can free her from the vampires for good.


BOOK TWO: Save My Soul:


But the dark being that haunts this house, is something far more sinister than a ghost. Luc is an ancient incubus, trapped by a fifty-year-old curse, and Anna is a temptation too sweet for any demon, let alone a practically starved and crazy one. Will she exorcise her house and live happily ever after with her cats, or will she fall prey to a dark lover who doesn't just want her body, but her soul as well?


If the demon has his way, dying will be her best case scenario.


Panthers don't do responsibility. They don't do long-term relationships. They definitely don't raise kids. But when Z discovers a young werewolf in the forest, he takes him in, unaware of the powerful beings hunting the pup.


Fiona is a witch who can't leave her house; the birds have told her something bad will happen. The mailbox is as far as she'll go, but even that may provide more danger than she's bargained for. When a wolf pup stumbles into her garden, her safe, wrapped-up world heads for a free fall, especially when a sexy panther shifter kidnaps her to help him look after the pup.